Tomorrow is our annual Halloween party. Which has more recently been referred to as our annual Decade Karaoke Party since some people claim they do not like Halloween costume parties.

In a previous post, I jokingly referred to myself as a karaoke pusher, but some people have accused me of being too pushy in general. I’m not proud of it, but it’s true. When I want something, I’m relentless about getting it. It’s hard for me to take no for an answer. I will guilt trip people, wear them down, and resort to psychological tactics that are empirically proven to be effective in manipulating behavior.

I confess, my relentless pursuit of what I want has contributed to problems in my relationships. In fact, I am no longer in relationships with some of my accusers, and I’m sure that my pushiness contributed at least in part to the demise of those relationships. I am trying to be less pushy, but the truth is, I really believe that I am pushing people to do something that is good for them and that they want deep down.

In the 10 years that I have been hosting karaoke parties, everyone who has claimed to hate karaoke really did have an inner rock star. Sometimes it took more time and alcohol to coax that part out of them, but it was definitely in there.

I am even more certain that everyone has an inner child, because it is impossible to be an adult without passing through childhood at some point. And what child doesn’t like dressing up in costumes? None that I know of. And again, in my experience, when I have forced people to dress up for Halloween, they always enjoyed it in the end.

And in my defense, I may be pushy, but I am also patient. I don’t care if it takes them years before they fully participate in the festivities. I’m fine with them sitting there at the party pretending not to like karaoke and costumes for as long as they want. Because that is how confident I am that I will be right in the end. I mean, they keep coming to the parties, so they can’t hate it that much.

Although I have to admit, I have also been accused of always thinking I’m right. Which is also true, but I really am right most of the time, so I think those people are just sore losers.

Here are some pictures from past Halloween parties. Two of the people in the bottom picture claim that they don’t like karaoke, but you probably can’t pick them out, because they are all having a good time. More evidence that I am right about everything I just said. 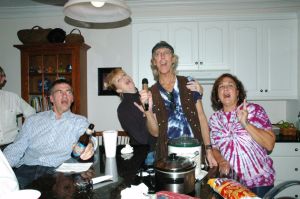 I didn't know it at the time, but I wanted to be a psychologist so that I could figure out how to be normal. I think many people come to counseling for the same reason. What I've come to learn is that feeling good about myself is not about trying to be normal. It's about trying to be me. But it's a constant struggle for me, just like it is for everyone else. So I thought I would approach this task with openness and honesty and use myself as an example for how to practice self-acceptance.
View all posts by Christy Barongan »
← The Ebola Rule
Undeserving →