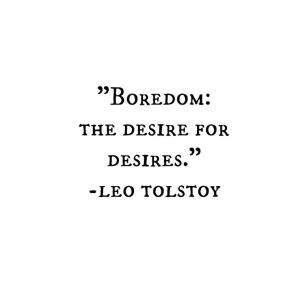 Of all of the feelings I’ve written about, I’ve conveniently avoided describing boredom in detail. Because boredom is perhaps the hardest one of all for me to tolerate. And it’s the hardest one to write about when I’m experiencing it because I have no motivation to do anything.

I think of the way my niece Sadie says she’s bored. A fleeting feeling at a party where she’s been riding go carts, dancing, and playing with her cousins all day because, at the moment, she’s not doing anything exciting. So then she’ll ask me to play with her and she is no longer bored. Problem solved.

As a child, I experienced boredom in the same way. But as an adult, boredom has become much more sinister. It feels personal. Like I have failed at something. Like I am the only loser who is sitting here at home doing absolutely nothing while other people are getting sunshine or being productive or having fun. Which doesn’t make any sense, because I know that at some point I will be motivated to get sunshine and be productive and have fun. But in this moment, I feel trapped in this endless nothingness.

Actually, nothingness doesn’t seem to capture the intensity of how I experience boredom. It is actually some agitated state. Some less extreme hybrid of depression and anxiety combined with paralysis of will. Yes, I could go read my book. Or knit. Or call someone. Or write. Or anything, really. Except I can’t. Boredom has me in its grip, and it won’t release me.

Last week I was having lunch at the lake with some friends, and I asked one of them if she was enjoying retirement. To my surprise, she said no. She was having a hard time with the quietness of lake life. She missed the city. Missed activity and excitement. And she’s been retired for 2 years. That’s a long time to be bored. I felt bad for her, but in a way it was a relief to know that boredom feels as terrible to other people as it does to me.

I know that’s why some people are workaholics. Why some people don’t take vacations and don’t want to retire. Plus there’s a kind of pride in being stressed, even if it’s not enjoyable. It’s almost like a contest. I bet I’ve had less sleep than you! I bet I can juggle way more than you can! Whereas there is nothing to be proud of when you’re bored. No one brags about how they slept 15 hours because they had nothing better to do.

Do you think Adam and Eve would have gotten bored in the Garden of Eden eventually, even if they hadn’t eaten from the Tree of Knowledge? Maybe they were already getting bored. Maybe they were like, it might be nice to try some different fruit for a change, just to spice things up.

Maybe boredom is inevitable, even when you live in paradise.

I’m trying to treat boredom the way I treat any other feeling. I remind myself that it’s just a feeling. Nothing to be alarmed about. Everyone experiences boredom. And it will pass eventually. You might even feel better later today.

And you know what? I do feel less bored than I was when I started this post.

I didn't know it at the time, but I wanted to be a psychologist so that I could figure out how to be normal. I think many people come to counseling for the same reason. What I've come to learn is that feeling good about myself is not about trying to be normal. It's about trying to be me. But it's a constant struggle for me, just like it is for everyone else. So I thought I would approach this task with openness and honesty and use myself as an example for how to practice self-acceptance.
View all posts by Christy Barongan »
← Live Like You Were Dying…Without Obsessing About Death
Just An Ordinary Day →