RSS Feed
← On the Road to Enlightenment
Angels and Demons, Part 2 → 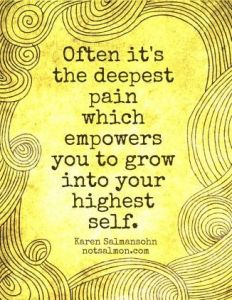 Actually, I think I know why. It occurred to me earlier this year that my interest in trauma may be more than just intellectual curiosity. I am always “jokingly” saying that I was traumatized by my some of my past relationships. I have mini-flashbacks. I shut down when people yell at me. I have an exaggerated startle response.

And I had anxiety attacks during the presentations on trauma at this conference. Yesterday afternoon I had to take an Ativan because I felt like I was drowning. I couldn’t go back to the conference today; two days of listening to examples of my relationship history were all I could tolerate.

Still, like my clients, I look back at the events of my life and think, was it really that bad? There are lots of people who had it worse than me. But the more I learn, the more I realize that everyone has experienced some trauma.

I was reminded during this conference that many therapists have experienced trauma. Helping others is a way to have a sense of mastery over our past. That’s why it seems depressing to most people to spend all day listening to other people’s problems, but it isn’t to us.

You would think that realizing that I have been traumatized would make me feel bad about myself, but the opposite is true. Instead of thinking that I’m weak and pathetic because I get overwhelmed easily and shut down and can’t function, now I think, look how awesome I have coped with everything! I kick ass!

In fact, resilience, post-traumatic growth, and grit are the new darlings of positive psychology. Some people thrive in the face of traumatic events. Sometimes they even find a way to turn it into something good–usually by trying to help other people.

For example, the student organization that I supervise, Active Minds, was founded by Alison Malmon, whose brother committed suicide while he was a student at the University of Pennsylvania. He had not told anyone that he was suffering from schizoaffective disorder, including his family. Alison recognized that many students probably lived in secrecy like her brother did, so she created Active Minds, whose goal is to raise awareness and reduce stigma about mental illness on college campuses.

Let me make clear that I am not in any way saying that everyone should be able to overcome traumatic experiences if they try hard enough. Some of it is luck. I have many resources that other people do not, for which I am thankful, but I didn’t do anything to earn them.

Still, for me, finally acknowledging that I have lived through traumatic experiences doesn’t make me feel broken. It actually makes me appreciate how strong I am.

I didn't know it at the time, but I wanted to be a psychologist so that I could figure out how to be normal. I think many people come to counseling for the same reason. What I've come to learn is that feeling good about myself is not about trying to be normal. It's about trying to be me. But it's a constant struggle for me, just like it is for everyone else. So I thought I would approach this task with openness and honesty and use myself as an example for how to practice self-acceptance.
View all posts by Christy Barongan »
← On the Road to Enlightenment
Angels and Demons, Part 2 →