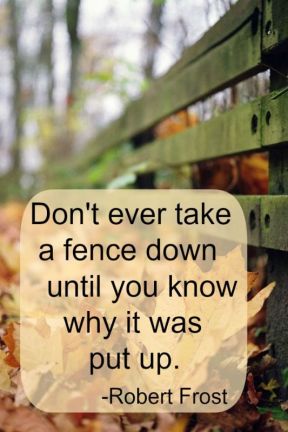 Last night I was reading “The Girl on the Train” for book club, and one of the characters describes how she feels like someone has been in her house and has touched all of her stuff, even though nothing is out of place. I don’t know why yet, but my guess is that her intuition is correct.

It reminded me of this time when I came home and felt the same way. Except something was out of place. The TV was on some channel that I never watch. I was momentarily afraid. Then I called my boyfriend at the time and he said he had gone into my house to hang out for a while because he was hiding from his ex-wife. I thought that was weird. Why in the world would he not have told me that? Or asked me if he could go to my place? Why did he just feel like he could go over there like it belonged to him?

There were psychological boundary violations, too. He would purposely not respond to my calls and texts when he was up to something and would then accuse me of being too needy. In retrospect, it’s pretty clear that he was the one who needed me, but it struck a cord with me, so I didn’t know which one of us was crazy. Maybe we both were.

Although it was mostly him.

When these memories come up, I’m glad that I’m not in a relationship. I continue to struggle with not knowing when I’m feeling someone else’s feelings. It all feels the same to me. It makes it a little easier if there’s no one here in my life, invading my physical and psychological space. But how long do I have to be alone before I know that it’s safe to invite someone back in?

This ex who could not differentiate my stuff from his own once told me that as a kid he used to have nightmares of being in a room with no walls. That would be a terrifying thing. I imagine maintaining or protecting boundaries is easier to do if there are already walls built into the spaces in your mind. But how do you know where to put them, if all of your life there’s just been this undefined space?

I still don’t have the answer for that. Although one clue seems to be that, if I meet someone and the thought of them makes me anxious or angry, that’s probably a sign that I might not want to go out with them.

I didn't know it at the time, but I wanted to be a psychologist so that I could figure out how to be normal. I think many people come to counseling for the same reason. What I've come to learn is that feeling good about myself is not about trying to be normal. It's about trying to be me. But it's a constant struggle for me, just like it is for everyone else. So I thought I would approach this task with openness and honesty and use myself as an example for how to practice self-acceptance.
View all posts by Christy Barongan »
← I Understand Why they Call It Practice
I’m In Between Shoes Right Now →