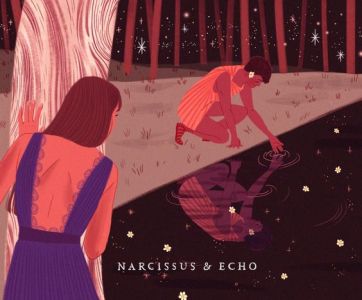 Have you ever wondered where the term narcissist comes from? In case you’re not big on Greek mythology, I’ll tell you the story.

One day Narcissus was walking in the woods when Echo, a mountain nymph, saw him, fell deeply in love, and followed him. Narcissus sensed he was being followed and shouted “Who’s there?” She eventually revealed her identity and attempted to embrace him. He stepped away and told her to leave him alone. She was heartbroken and spent the rest of her life alone, until nothing but an echo remained of her. Nemesis, the goddess of revenge, learned of this story and decided to punish Narcissus. She lured him to a pool where he saw his own reflection. He did not realize it was only an image and fell in love with it. He eventually realized that his love could not be reciprocated and committed suicide.

I have become an expert in narcissists. They sense my presence and ask me out, want to become my friend, show up in my therapy office. I once told my therapist that I must be a magnet for narcissists because I’m narcissistic, but then I realized that it was actually because I’m the perfect target for them. I take the blame for everything. If someone tells me I’m wrong, I have terrible taste, I’m not good enough, I’m crazy, I believe them. I try to change. It doesn’t occur to me that it’s them until I am already deep into the relationship. And even then, they make me question reality.

But I’m getting better at spotting them sooner. And in an effort to spare you from becoming a target, I’ll share with you some of the warning signs that you may be in a relationship with a narcissist.

If after reading this list you realize that you are in a relationship with a narcissist, I feel tremendous compassion for you. It’s not always possible or easy to end your relationship with them. They’re very convincing. And punitive when you leave. But take heart and know that it’s them and not you. Once you realize that, you can decide where you want to go from there.

I didn't know it at the time, but I wanted to be a psychologist so that I could figure out how to be normal. I think many people come to counseling for the same reason. What I've come to learn is that feeling good about myself is not about trying to be normal. It's about trying to be me. But it's a constant struggle for me, just like it is for everyone else. So I thought I would approach this task with openness and honesty and use myself as an example for how to practice self-acceptance.
View all posts by Christy Barongan »
← I’m Obsessing
Don’t Believe Everything You Think →