I love Karaoke.  And it’s not because I’m some great singer.  I just love to sing.  And when it’s done in the privacy of your home in front of the people who know you best, it’s not as scary as you might think.

This Friday we are having our second Decade Karaoke Party.  Not everyone likes Karaoke.  At least that’s what they claim.  So I often have to trick people into singing.  Everyone has an inner rock star, and one of my missions in life is to help people let this part out.  I would have been a great drug dealer, but fortunately I choose to use my powers of influence for good instead of evil.

By the next Karaoke party, they’re usually singing solos.  In fact, one person bought a Karaoke machine and hid it so his wife wouldn’t know that he had become a closet Karaoke singer.  He hosted the first Decade Karaoke Party.

If I could, I would have a Karaoke machine in my office and I would use singing as a therapy technique.  Kind of like what Tracy Ullman did as Ally’s therapist on Ally McBeal.  She made Ally choose a theme song, but I think it’s more important to sing in front of someone.  It’s freeing to know that you can enjoy doing something without worrying about being good at it or looking foolish.

Once you let go of those fears, anything is possible. 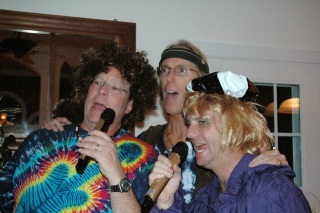 I didn't know it at the time, but I wanted to be a psychologist so that I could figure out how to be normal. I think many people come to counseling for the same reason. What I've come to learn is that feeling good about myself is not about trying to be normal. It's about trying to be me. But it's a constant struggle for me, just like it is for everyone else. So I thought I would approach this task with openness and honesty and use myself as an example for how to practice self-acceptance.
View all posts by Christy Barongan »
← Positive and Negative Feedback
You Know You’re Filipino if… →