RSS Feed
← Out of the Mouths of Babes
No Offense →

For the Love of Food 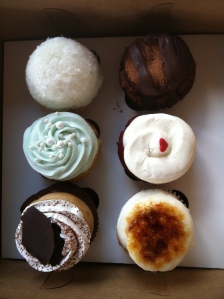 Kids grow up so fast these days.

I spent Thanksgiving with my niece, and since I only see her every few months, I am keenly aware of every change that takes place in my absence. The addition of Seriously?! into her vocabulary. Her latest career aspiration (humanitarian and veterinarian). The evolution of what it means for her to be a girl. Thank goodness that now includes sports! It makes it a lot easier to watch UVA football and basketball games when I’m down there.

On this trip, her latest thing was to ask how many calories something has and to obsess about being skinny. Did I mention that she is eight years old? I specialize in eating disorders, so I’m well aware of the stats on how early girls begin to worry about their weight, but it’s still shocking to see it play out in real life.

One of the things I’ve always loved about her is how much she enjoys food. When she was a baby, one of her first words was cake. Desserts were usually the most memorable part of any family gathering for her. And whenever she eats, she hums to herself and periodically shakes her hands over her head like kids do when they’re excited. So when we went for brunch and she asked me how many calories pumpkin waffles had, I was disheartened.

I’ve never had an eating disorder, but I know how it feels to spend your life worrying about getting fat. I didn’t start worrying about it until I was about 25, which is pretty late in the game these days, but that’s still 20 years of my life that I’ve spent thinking about the state of my body. I obsess less than I used to, but I still monitor my weight.

I’ve always been a little turned off by the campaigns to combat all of the body image brainwashing. Especially the suggestion that we should compliment people on their personality rather than their appearance. That seems incredibly unrealistic to me. But maybe I’m just vain and superficial and want to hear compliments about my appearance.

Even focusing on eating healthy and exercising can be problematic, because anorexia often begins with that very goal. Being extremely health-consious and fit can be just as obsessive and unhealthy as having an eating disorder. And there’s nothing more boring than talking to someone who is on a diet. (Sorry, dieters, but it’s true.)

I’m not sure what the solution is, but perhaps it would be better to focus on giving ourselves permission to enjoy food in addition to loving our body. Because food shouldn’t be the enemy, either.

I don’t do prevention programs for children, so I wasn’t really sure what an age-appropriate intervention would be for an eight-year old. So I just told Sadie that I work with college students with eating disorders, and they spend many years suffering because they want to be thinner. That if she starts worrying about calories now, that’s a long time to spend not being able to enjoy food. So I made a deal with her that we would not talk about getting fat while we were around each other.

She agreed, and we happily ate our pumpkin waffles together. I’m sure it didn’t put an end to her focus on calories and staying skinny, but at least I can hold her accountable when I see her. And she can do the same for me.

I didn't know it at the time, but I wanted to be a psychologist so that I could figure out how to be normal. I think many people come to counseling for the same reason. What I've come to learn is that feeling good about myself is not about trying to be normal. It's about trying to be me. But it's a constant struggle for me, just like it is for everyone else. So I thought I would approach this task with openness and honesty and use myself as an example for how to practice self-acceptance.
View all posts by Christy Barongan »
← Out of the Mouths of Babes
No Offense →