RSS Feed
← Why Didn’t I Think of That?
If You Don’t Keep a Journal, I Highly Recommend It →

Can’t You Take a Compliment? 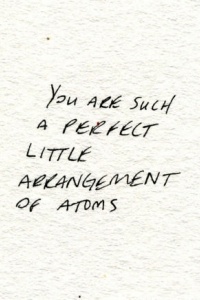 As much as I want to believe good things about myself, I am really bad at accepting compliments. It’s puzzling. Another one of those things I file under the “we’re not as rational as we think” category.

Like, once when this guy complimented me on my legs, I said, “Are you making fun of me?” I actually said that out loud, to his face, instead of the more common response of “thank you.” I really thought he was insulting me. That is how compliments get processed in my brain.

Can you imagine how hard it would be to be in a relationship with someone who, every time you gave them a compliment, they heard it as an insult?

That’s exactly why I’m not dating anyone. I don’t want to put some unsuspecting guy through that kind of torture.

Or like, when I was in grad school, my advisor thought I was great. He was always complimenting me in front of other students–which they found annoying–and he would tell everyone how I was the best grad student he’d ever had.

And you know what I thought? I thought he must have pretty low standards. He must not be a very good psychologist if he thought I was the best grad student he’d ever had.

So not only do I take compliments as insults, but I also think less of the person who has given me a compliment.

I’ve been thinking about all of these compliments that people have given me over the years. Even the ones from high school–which was a long time ago. And I have to say, it’s much more pleasant than the things I usually obsess about. It kind of makes me feel full of myself, but it still feels pretty good.

Perhaps I just have some kind of delayed processing disorder where information doesn’t compute in my brain until years later.

These days, I try not to seem as crazy on the outside as I feel on the inside. When someone gives me a compliment, I have trained myself to say “thank you.” I do not insult them. I do not try to undo their compliment by saying something insulting about myself.

Actually, now that I think about it, I still kind of do that. Because when someone says my hair looks nice, I usually reply with “Thanks. I finally washed it.” So I guess I still need to work on that part.

But still. I’m getting better at it. We may not always be rational, but we can become more aware of when we’re not being rational and try to align our feelings with our behavior.

So if you feel like giving me a compliment so that I can get more practice, I promise I won’t insult you.

Posted in Self-Acceptance and tagged self-esteem. Bookmark the permalink.

I didn't know it at the time, but I wanted to be a psychologist so that I could figure out how to be normal. I think many people come to counseling for the same reason. What I've come to learn is that feeling good about myself is not about trying to be normal. It's about trying to be me. But it's a constant struggle for me, just like it is for everyone else. So I thought I would approach this task with openness and honesty and use myself as an example for how to practice self-acceptance.
View all posts by Christy Barongan »
← Why Didn’t I Think of That?
If You Don’t Keep a Journal, I Highly Recommend It →