Competition can bring out the worst in people. It is not uncommon to see anger outbursts on the tennis court from people who are ordinarily even-tempered. They’ll yell, hit the net, or knock the ball out of the park. You don’t see too many people break their racket at our level, but I had a partner do it once because he was mad that I wasn’t coming to the net.

I actually think that I have a better attitude in tennis than I do in real life.  For example, since I obsess about money, I would never break a $200 racket. Plus, I try to not let my opponents know that I’m upset because that gives them a mental advantage. Plus, I love my racket in part because it’s purple, and if I had to get a new model it would not be purple.

Some people will use head games to gain an advantage. They will intentionally make bad line calls or accuse you of making bad line calls. They will argue about the score, time violations, lineup changes, coaching, and bathroom breaks. Or they’ll do seemingly positive things to disrupt your concentration like crack jokes, be chatty, or tell you how awesome you’re playing.

I admit, sometimes I’ll use positive head games to counteract negative ones. I try to capitalize on the fact that it’s hard to be mean to someone who is being fair and kind. Last year I played against this person who is known for causing drama and making bad line calls, so I was super nice to her from the start. It worked for the most part but she still made one bad call. My partner went ballistic but she insisted the ball was way out, which was a flat out lie. I said “it may have been out, but it wasn’t way out,” just to end the argument. There were no other disputes about line calls and no hard feelings by the end of the match.

In a relationship, however, if my partner uses head games I yell at him for trying to manipulate me.

Another common way to deal with frustration is to blame your partner for blowing the point. If my partner criticizes me I either ignore it, call them on it, or never play with them again. This is one place where I won’t try to make the relationship work at all costs.

I rarely criticize my partner on the court. In fact, I take pride in being able to bring out their best game. I praise them for the things they’re doing well. I help them stay focused and positive. I get them to dig deep when we’re on the verge of losing.

However, in real life I am pretty sure my exes would tell you that I have no problem doling out the criticism.

I am also less critical of myself in tennis than I am in life. Most of the time I’m able to let mistakes go and focus on the next point. I don’t get too upset about losses. In fact, my current record is 7-11. But I play so much tennis that another opportunity to win is just around the corner.

In relationships I focus on all the negative outcomes and wonder what I’m doing wrong. In tennis, I focus more on the process than the result. As long as I’m happy with how I played, I don’t mind losing. And it’s fun to win, but the thrill of winning doesn’t last as long as the joy of trying to get better, looking forward to the next match, and fighting for the win on the court.

Maybe I should treat my next relationship like a tennis season. 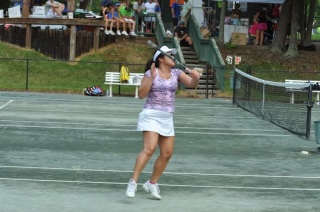 I didn't know it at the time, but I wanted to be a psychologist so that I could figure out how to be normal. I think many people come to counseling for the same reason. What I've come to learn is that feeling good about myself is not about trying to be normal. It's about trying to be me. But it's a constant struggle for me, just like it is for everyone else. So I thought I would approach this task with openness and honesty and use myself as an example for how to practice self-acceptance.
View all posts by Christy Barongan »
← 100th Post!
The Perfect Solution →