RSS Feed
← Moving Beyond Post-Apocalyptic Strategies for Motivation
Waking Up is the Hardest Part. But All of It Pretty Much Sucks. → 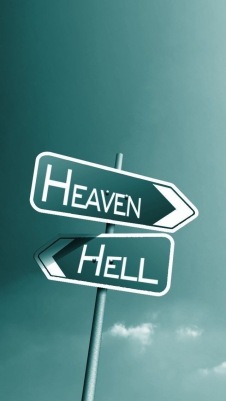 Still, just to be on the safe side, I always pray to be forgiven for all my sins, intentional and unintentional, just to cover all bases. Just in case I’m sinning but I’m in denial or rationalizing my actions. It’s kind of obsessive, I know, but in case you haven’t noticed, I am obsessive.

At the same time, I have a hard time imagining who would be bad enough to go to hell. I’m sure serial killers are in there, but beyond that I can’t think of anyone who is more bad than good. Perhaps I am too forgiving. Although I’m sure some of my exes would disagree.

I struggle with having other people say with authority what constitutes hell-worthy acts. Because if there’s a judgment day, then it shouldn’t already be predetermined who goes to hell, right? Just like when you commit a crime on earth. You don’t know what the outcome is going to be until the judge or jury makes a decision, even if you think the outcome should be obvious. Like the OJ Simpson case, for example.

Since the terrorist attacks on Paris, I think about all of those suicide bombers who have been told since they were kids that their sacrifice will be rewarded by virgins in the afterlife. On the one hand, all wars involve killing innocent people, so it seems too extreme to say that killing people in the name of war is a sin.

In the near death experience book that I always talk about, My Descent Into Death, Howard Storm went to hell–or to the doorstep of hell, at least–before he went to heaven. I actually read the book because I wanted to see what kind of person was bad enough to go to hell.

And I have to say, I would not have pegged him as someone who would be damned for all eternity. He just seemed like an average guy. Just some art history professor with a wife and kids. Granted, he wasn’t religious and was a bit prideful. I think if demons were attacking me and a voice told me to call out God’s name, I would do it, rather than argue about how that was a ridiculous idea like Storm did.

You know what comforted me the most about that book? Even when Storm was on the doorstep of hell, God was still trying to save him. God was still saying, say my name! Ask for help! And as soon as Storm did, he went to heaven. That is more consistent with what I believe to be true about God. That he is someone who is trying to get us to choose heaven, right up until the very end.

That’s how I have reconciled the idea of hell. We can choose it if we want to, because we have free will. We can choose not to ask for help. Not to love or forgive. We can judge ourselves or other people as being lost causes. But God always wants us to say yes to him. So I do.

I didn't know it at the time, but I wanted to be a psychologist so that I could figure out how to be normal. I think many people come to counseling for the same reason. What I've come to learn is that feeling good about myself is not about trying to be normal. It's about trying to be me. But it's a constant struggle for me, just like it is for everyone else. So I thought I would approach this task with openness and honesty and use myself as an example for how to practice self-acceptance.
View all posts by Christy Barongan »
← Moving Beyond Post-Apocalyptic Strategies for Motivation
Waking Up is the Hardest Part. But All of It Pretty Much Sucks. →