Why I Have a Superhero Complex

When I was a kid I remember going to K-Mart with my dad, trying to get him to buy me a toy, as usual. We passed by the jewelry section, and he said he needed to buy something first. He had promised one of his patients that if she lived he would buy her some jewelry. He said that he didn’t expect her to live, but since she did, he wanted to keep his promise.

I never forgot this incident because it impressed upon me what a good doctor my dad was. I could imagine him talking to this patient as he made rounds at the hospital. I could see him greet her with his unmistakable laugh, reassuring her that she was going to get better. All of his patients loved him. I wouldn’t be surprised if she got better just for him.

My dad was equally dedicated to his family.  During his periods of depression, the thing that plagued him the most was his fear that he had not spent enough time with us because of work. I was shocked when I heard this. My dad attended every tennis match, awards ceremony, and piano recital we were in. Even now, although we all live in different cities, we try to get together for birthdays and holidays because being together as a family has always been a priority. He has his faults, but failing to spend time with us is definitely not one of them.

Above all else, the reason my dad was a dedicated doctor and father is because this is how he has chosen to serve God. I must admit, it bothered me to hear this when I was a kid. Kind of like when the flight attendant tells parents to put their oxygen mask on before helping their children. As a child, I didn’t want my dad to love God more than he loved me. But as an adult, I appreciate how admirable it is to live your life with that level of commitment.

One of the reasons why I berate myself when I’m not able to function is because depression never stopped my dad from performing his duties. Once he confessed to me how bad things were for him when he was depressed. How it would take him forever to dictate his notes because his cognitive abilities were so compromised. How he would obsess about forgetting some detail and would drive back to the hospital. How there were times when he wanted to give up. But he didn’t. He still went to work every day, came home every night, and made us pray together as a family before we went to bed.

People give me a hard time because I want to save the world. But with a dad like mine, how can I expect anything less of myself? It is a high standard to try to live up to, but if I have to struggle with something, there are worse things than having a superhero for a father. 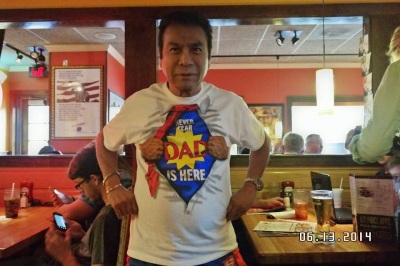 I didn't know it at the time, but I wanted to be a psychologist so that I could figure out how to be normal. I think many people come to counseling for the same reason. What I've come to learn is that feeling good about myself is not about trying to be normal. It's about trying to be me. But it's a constant struggle for me, just like it is for everyone else. So I thought I would approach this task with openness and honesty and use myself as an example for how to practice self-acceptance.
View all posts by Christy Barongan »
← Escape in the Moment
Interventions, Part 2 →