I’m in the car with my brother and his family, on the way to Florida for vacation. We’ve been on the road for 9 hours, and we still have 4 more torturous hours to go. My niece almost had a breakdown in the restaurant when her dad told her how much longer it was going to be, and I have to admit, I had to restrain myself from throwing a temper tantrum, too.

But when I think back to when we were kids, I really have nothing to complain about. The four of us are seated comfortably in an SUV that seats 7 people with a DVD player, multiple tablets and cell phones, hot spots, satellite radio, and knitting projects to keep us entertained. My friends are texting, emailing, and calling with tennis updates so that I’m not out of the loop. Everyone can listen to or watch whatever they want without bothering anyone else. No sharing required. Nothing like the forced captivity of what I faced as a kid when my family went on vacation.

Back then they didn’t have SUVs that seated 7 people. Instead, 7 of us traveled in a sedan that sat 4 people. How, you ask? Luckily, Filipinos are small. Still, we had to be resourceful. My youngest brother would be on the floor at my mom’s feet on the passenger side in the front. My overweight grandmother, 2 brothers, and I would all be scrunched up in the back seat. All of us couldn’t sit back at the same time, so one of us 3 kids had to rotate sitting forward on the edge of the seat every hour or so. On trips that sometimes lasted 10-12 hours. I don’t know how we did it without killing each other.

And instead of having individual electronic devices that allowed everyone to enjoy their preferred music or movie, we listened to whatever my dad wanted to listen to.  For awhile it was this one cassette that came with his car and featured an assortment of the kind of instrumental songs you would hear on “The Lawrence Welk Show.” But I also remember listening to hits like “Rhinestone Cowboy,” “Honey,” and “You Needed Me” several hundred times. Ask any of my brothers the lyrics to these songs and they can sing them to you word for word.

But even back then, we were better off than the families that traveled out west in covered wagons. All they could do to entertain themselves was talk and sing to each other for months. But maybe they didn’t have a lot of down time since they had to try to stay alive and all. I read once that families were so worried about making it before winter that they wouldn’t even stop the wagon when one of the kids fell out. Which kind of traumatized me. Maybe that’s the intimidation strategy they used to keep kids quiet back then. “Don’t make me come back there and throw you out of the wagon!”

My brother and I were just telling Sadie about what it was like for us back when we were kids to keep her from whining every 30 minutes about not being there yet. I’m sure we just sound like adults sounded to us when we were kids, with their tales of how hard life was before all the modern conveniences that kids have today.

Still, she did start watching another DVD so that she didn’t have to listen to us anymore. So that’s something. 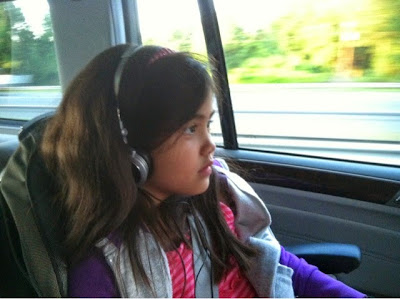 I didn't know it at the time, but I wanted to be a psychologist so that I could figure out how to be normal. I think many people come to counseling for the same reason. What I've come to learn is that feeling good about myself is not about trying to be normal. It's about trying to be me. But it's a constant struggle for me, just like it is for everyone else. So I thought I would approach this task with openness and honesty and use myself as an example for how to practice self-acceptance.
View all posts by Christy Barongan »
← Fatigue
Liebster Award →