RSS Feed
← If There Were a Prize for Most Likely to Obsess Over Nothing, I Would Totally Win
Empathy vs. Compassion → 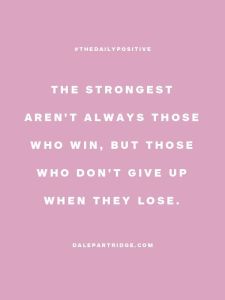 This year I had several people opt to leave my team so that they could join a more competitive team instead. I guess I can’t blame them for that, because most of the players on my 4.0 team are rated 3.5. Which is not a good thing if your goal is to win. But I do have a greater appreciation for the people who play on my teams because they care more about having fun than they do about winning.

Don’t get me wrong; I want to win. I’ll chase every ball down and risk throwing up on the court if I have to in order to win the point. It’s just that, at the end of the day, going out to eat with my friends afterwards is just as much fun as winning. And I’m not willing to kick people off my team just because they lose. Hell, I’d be the first person to get the boot if that were the case.

I’m not sure it’s going so well. I don’t think I’m winning any more than I did last year, but I curse at myself more often, and more loudly, on the court. And I’m a lot harder on myself. And I’m more pissed off when I lose.

Perhaps this wasn’t such a good idea after all.

Despite my increasingly bad attitude, I never get upset when my teammates lose. In fact, if the match was close, I count their loss as a win. Like the other night we lost 1-4, but when I wrote up the summary, I wrote it as though we had won 3-2, since 2 of the losses were in the tiebreak. When one of my teammates commented on how positive I was, I thought, well it’s easy to be positive when you win.

But then I remembered that we lost.

In a previous post I brought up the debate of whether it’s better to love winning or to hate losing. Federer plays because he loves winning. Nadal plays because he hates losing. Things have worked out pretty well for both of them, so I guess you can’t go wrong with either approach.

But I’m not sure either of these statements accurately reflects why I play. I love trying to get better. I love trying to win. I love having a way to exercise that doesn’t involve torturously counting every second while I’m on a machine. I love having something that allows me to forget what a terrible day I’m having and focus solely on hitting the ball. I love practicing and I love competition. I love cute outfits and friendship and food.

And I can enjoy all of these things, regardless of whether I win or lose. I guess when it comes down to it, I really just love playing.

I didn't know it at the time, but I wanted to be a psychologist so that I could figure out how to be normal. I think many people come to counseling for the same reason. What I've come to learn is that feeling good about myself is not about trying to be normal. It's about trying to be me. But it's a constant struggle for me, just like it is for everyone else. So I thought I would approach this task with openness and honesty and use myself as an example for how to practice self-acceptance.
View all posts by Christy Barongan »
← If There Were a Prize for Most Likely to Obsess Over Nothing, I Would Totally Win
Empathy vs. Compassion →