RSS Feed
← How to Predict the Future
A History of Trauma →

Once upon a time that was a deer named Bambi who lived in the woods with her mother. Bambi’s best friend was a bunny named Thumper. Thumper would often come to Bambi’s neck of the woods and Bambi’s mom would give them milk and homemade cookies.

One day when Bambi and Thumper were out playing in a meadow nearby, a big scary metal thing with wheels came and cut down all the trees. Bambi’s home was destroyed and her mom was killed. Bambi cried and cried, and didn’t know where to go or what to do. Then Thumper told her that she knew a girl named Goldilocks who was looking for some help with cooking and cleaning. Bambi was a good cook because her mom taught her how so she decided to apply for the job.

Goldilocks lived with a family of bears. When she knocked on the door to apply for the job, Baby Bear warned her that Goldilocks was high maintenance and everyone who took the job quit within a week. But Bambi had no other choice so she applied anyway.

Because there were no other applicants, Bambi got the position. But Baby Bear was right; Goldilocks was scary. She was always complaining that nothing was ever good enough. Her food was either too hot or too cold. Her bed was too soft or too hard. Her chair was uncomfortable. Goldilocks would get mad and yell at everyone so loudly that the windows would shake.

Goldilocks liked to throw parties because she needed to be the center of attention. So at the last minute, she told Bambi she had invited a bunch of her friends and Bambi needed to clean the house and have food ready for that night. Bambi was really stressed about this but she did the best that she could, hiding stuff in closets and under beds. She didn’t have time to cook so she just bought some things from Sam’s that she could heat up quickly.

That night everyone came dressed as characters from fairy tales, because Goldilocks liked all of her parties to have a theme. The seven dwarves were there, and all the Disney princesses, and Shrek and his wife Fiona. At first everyone was having a good time, eating and singing and dancing. But then Goldilocks wanted the whole group to get together so that she could take a picture and put it on social media. She wanted to show the world how fun her parties were.

Bambi didn’t come right away when Goldilocks called because she was in the kitchen frying egg rolls. So Goldilocks had a really bad temper tantrum because she had been drinking. She screamed at Bambi in front of everyone and told her that she was stupid and ugly. Usually Goldilocks didn’t let people see this side of her so all of the guests were scared and ran away.

Bambi was scared, too, so she ran back to what was left of the woods that were her home and decided that she would sleep there for the night until Goldilocks cooled down. While she was sleeping, Bambi had a dream that her mom’s spirit came to her and whispered in her ear. Don’t go back, her mom said. Anything is better than this life. You can make it on your own. I have faith in you. Bambi felt comforted by her mom’s voice and didn’t want the dream to end.

But when she woke up, she felt alone and afraid again. The world felt unsafe, and even if Goldilocks was mean sometimes, she was also nice sometimes, and that seemed better than nothing. So she went back to Goldilocks’s house and apologized for not coming right away when Goldilocks wanted to take the picture for social media.

The family of bears moved out shortly after the party because Goldilocks’s public temper tantrum was the last straw for them. So they wished Bambi luck and gave her their new address if she ever needed them. Thumper also begged her to leave Goldilocks, but Bambi knew she would never leave so she spent less and less time with Thumper because she felt guilty and ashamed. So Bambi was left alone with Goldlocks and kept trying to find ways to please this person who would never be happy.

Bambi would often take the piece of paper out and look at the address for The Bears and try to convince herself that she was strong enough to leave and start over again. But she believed that she was stupid, because that’s what Goldilocks said to her all the time. So she stayed with Goldilocks and lived unhappily ever after.

The moral of the story: Get out of a bad situation, no matter how scary it may seem. 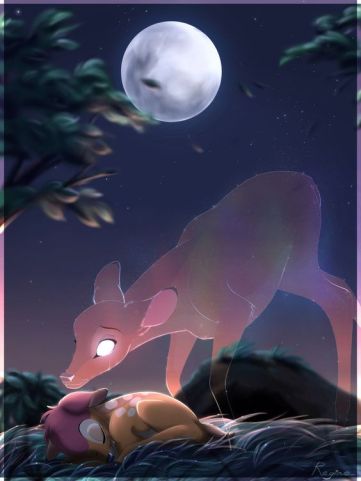 Posted in Relationships. Bookmark the permalink.

I didn't know it at the time, but I wanted to be a psychologist so that I could figure out how to be normal. I think many people come to counseling for the same reason. What I've come to learn is that feeling good about myself is not about trying to be normal. It's about trying to be me. But it's a constant struggle for me, just like it is for everyone else. So I thought I would approach this task with openness and honesty and use myself as an example for how to practice self-acceptance.
View all posts by Christy Barongan »
← How to Predict the Future
A History of Trauma →