RSS Feed
← The Courage to Be Vulnerable
Tennis Courtships →

Have I mentioned that I love tennis?

Even though I am a pretty decent player, I don’t consider myself an athlete, which people find confusing. How can you play tennis and not be an athlete? That makes no sense.

Well, when you say it out loud it doesn’t! That’s why you go to therapy. Because the mere act of saying something out loud helps you realize that some long-held belief has no logical basis whatsoever.

Nevertheless, there are certain things I believe an athlete should be able to do:

However, there is some evidence that disputes the validity of my criteria:

The problem is, feelings don’t have to be logical, so reason isn’t always useful in changing my mind (see Positive and Negative Feedback post). In cases like this, I often tell clients that sometimes believing in yourself requires a leap of faith.

So I’m working on my jumping ability, and it’s getting better. Maybe I’m an athlete after all. 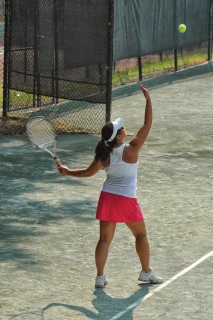 I didn't know it at the time, but I wanted to be a psychologist so that I could figure out how to be normal. I think many people come to counseling for the same reason. What I've come to learn is that feeling good about myself is not about trying to be normal. It's about trying to be me. But it's a constant struggle for me, just like it is for everyone else. So I thought I would approach this task with openness and honesty and use myself as an example for how to practice self-acceptance.
View all posts by Christy Barongan »
← The Courage to Be Vulnerable
Tennis Courtships →