Remember how my car broke down on the way to my friend’s wedding? Well, it turned out to be more of an inconvenience than an extra day and $1000. Try 2 extra days and $3000.

I tried my best to have a good attitude about it. I made a list of the things I was thankful for. I tried to put a positive spin on everything. It helped some, but it was still annoying.

You know what helped the most? I looked at the service ticket when I got home and it turned out that my rear brakes were 95% worn. I kind of thought they were unresponsive, but I didn’t think it was that bad. I’m actually thankful that my car broke down. I was speeding because I was late for the rehearsal dinner, and if I had to break suddenly, things could have been much worse. Maybe breaking down wasn’t a punishment for having a bad attitude after all. Maybe God was looking out for me.

I often tell clients that the events that they think are terrible at the time may turn out to be blessings in disguise. This is also supported by research on happiness. I mentioned in a previous post how people who become paraplegics from car accidents return to their baseline level of happiness after about a year. Sometimes they are even thankful for the accident, because it moved their lives in a more positive direction.

I guess if you’re really cynical, you could argue that they’re just rationalizing to make themselves feel better. I don’t think this is true, but even if it were, so what? Our beliefs are more compelling than reality, anyway. I’d love to be irrationally grateful.

This holiday weekend has been tough for me. Holidays are the hardest because they are supposed to be filled with family, friends, and food. And in this case, fireworks. I am 0-4. I think about how I’ve spent the 4th of July in the past. Some of the most recent ones were far worse than I could have imagined. Now that I’m single, the best I can hope for is that holidays won’t be as lonely and depressing as I think they will be. This one is about what I expected. (Unless Federer wins tomorrow. Then it will all be worthwhile.)

My tendency is to beat myself up for my single status. I must deserve it because of all the terrible relationship decisions I’ve made. Or maybe I’m just unlucky. Or maybe at some point in the future, I’ll look back and realize that this period of solitude was also a blessing in disguise. I’m not completely convinced of this, but I’m trying to be hopeful.

These are the flowers from the wedding. It has nothing to do with blessings, but I think it’s a cool picture. 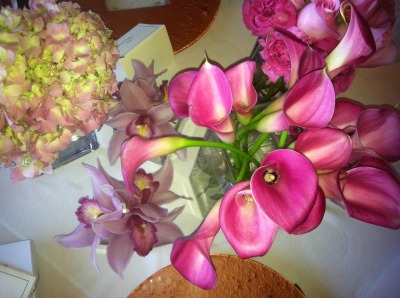 I didn't know it at the time, but I wanted to be a psychologist so that I could figure out how to be normal. I think many people come to counseling for the same reason. What I've come to learn is that feeling good about myself is not about trying to be normal. It's about trying to be me. But it's a constant struggle for me, just like it is for everyone else. So I thought I would approach this task with openness and honesty and use myself as an example for how to practice self-acceptance.
View all posts by Christy Barongan »
← Change
Motivation →