I am working with a client who was sexually assaulted and is thinking about taking her case to our judicial board. We talked about the levels of awareness that she went through before she could be ready to take this step. How at first she didn’t want to acknowledge what happened. Then she opened up to a few people who felt safe. Now she wants to make sure he understands that what he did was not OK. To force him to think about it the next time. She hopes to eventually share her story at Take Back the Night so that other people can benefit from it.

She knows that there will be people who won’t believe her. Who will blame her for what happened. She prepares herself by reminding herself that as long as she knows what happened, that’s all that counts. But that’s a hard thing to do–to face the judgment within us and around us. It takes a lot of courage to face that kind of scrutiny.

I like to think of this process as a kind of declaration of independence–from our demons, from judgment, from fear. It happens every time someone goes to AA and admits they’re an alcoholic. Every time someone finds the courage to say I have an eating disorder. I struggle with depression. I live in fear. In making this declaration, they take away the power that their condition has to make them feel weak. Defective. Crazy.

To a lesser extent, I think of my blog as a kind of declaration of independence. I’ve tried to hide these things about myself all my life. I don’t want to be held hostage by them anymore. I want to be able to embrace everything that makes me who I am–especially the things that I am ashamed of.

The president of the student organization I advise, Active Minds, told me that he reads my blog, which kind of freaked me out at first. But he thought it was the most powerful way to fight stigma and to let other students know that they are not alone in their struggles with mental illness, which is the primary goal of Active Minds. So he is finding ways to give students the opportunity to make their own public declarations. It is a wonderful feeling to know that this has come out of my willingness to share my vulnerabilities.

I’ve always liked the expression that freedom isn’t free. You have to fight for it. Although blogging has been a surprisingly supportive and positive experience, I am well aware that there will be times when someone will judge me for what I say. I try to prepare myself for it by doing what my client is doing–to remind myself that ultimately, the only person who counts is me. Then I take a deep breath and hit Publish. 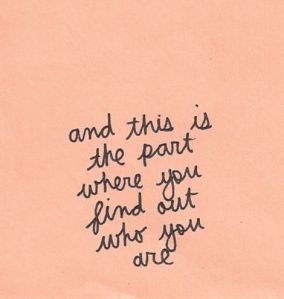 I didn't know it at the time, but I wanted to be a psychologist so that I could figure out how to be normal. I think many people come to counseling for the same reason. What I've come to learn is that feeling good about myself is not about trying to be normal. It's about trying to be me. But it's a constant struggle for me, just like it is for everyone else. So I thought I would approach this task with openness and honesty and use myself as an example for how to practice self-acceptance.
View all posts by Christy Barongan »
← Some Things Never Get Old
The Dilemma of Being Human →