Yesterday there was another shooting, but this time it was near my hometown. By another person who was inspired by Columbine, Virginia Tech, and Charleston. Who wanted to go out in a blaze of glory. And killed two young journalists in the process. Two people doing a feature story on the Chamber of Commerce on the morning news–because he wanted to make sure he got on the news.

In general, I believe that love is stronger than hate. That good trumps evil. But in moments like these, I sometimes wonder. Because one person’s hate has the power to destroy so much love. One act of evil can put an end to all of the good that these two people brought to the world.

The killer got his wish. No one may have paid attention to him before, but now he will be remembered forever. People will know his name. His act of evil has been immortalized. If I were to try to do the opposite of what he did–to perform one grand act of love, of goodness–it would not have the same impact. What does that say about the power of good vs. evil?

Still, in my state of helplessness, I do what I can. I pray. I send compassion. I’m sure it does something, but I’m not sure what. If I ask God to send them extra angels–even some of mine, and just leave me one–will they be surrounded by them? Will angels be there with them while they grieve? Will they sit with their pain? Will they make them feel God’s love?

If I send compassion, if I feel their pain, will it lessen their suffering? Make the pain more bearable? If I cry for them, will it absorb some of their tears? Or maybe sending love and compassion becomes a force that sits side by side with the grief, anger, and confusion. Maybe it helps to balance out the good and evil in the universe.

The people affected in these tragedies always say they feel the outpouring of love. During 9/11. Sandy Hook. And yesterday. During natural disasters. And even during our private tragedies. The friends who bring food when we are sick. The people who prayed for my father when he was depressed. Even though they didn’t know him. Just because they love me. I was deeply moved by how much other people cared about my family’s suffering.

When I went on the self-compassion retreat in May, we did this exercise where we imagined someone we knew who was suffering and we sent them compassion. And then we sent it to ourselves, because we felt their pain deeply. The whole time I was doing this, I thought, is this really going to help? Is sending compassion going to actually make a change in this person’s life? They didn’t even know I was doing it.

The instructor’s response to this question was perhaps one of the most helpful things that I learned in this retreat. He said that he didn’t know if it helped the other person to send them compassion, but it helps him to send it.

That’s a good enough reason for me. Sending angels and compassion helps me feel less helpless. And it helps me to put love and goodness at the forefront of my mind.

Because that’s one way that I won’t let that guy win. I won’t let him fill me with hatred. 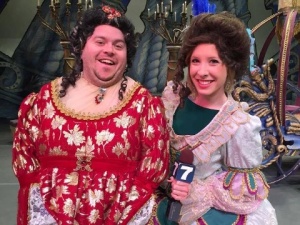 I didn't know it at the time, but I wanted to be a psychologist so that I could figure out how to be normal. I think many people come to counseling for the same reason. What I've come to learn is that feeling good about myself is not about trying to be normal. It's about trying to be me. But it's a constant struggle for me, just like it is for everyone else. So I thought I would approach this task with openness and honesty and use myself as an example for how to practice self-acceptance.
View all posts by Christy Barongan »
← Prince Eggshell
Weakness? I Don’t Think So →