Sometimes the best things in life emerge from our biggest disappointments. Last month I took my nieces on our 1st annual vacation, which we decided to call The Barongan Girls Take D.C. This trip would not have been possible if the trip to Germany that my niece Paloma and I were supposed to go on hadn’t been canceled due to the craziness in Europe. A friend suggested that I take a trip with her and go somewhere else, but I wasn’t sure a trip with me would be as appealing as a trip to Germany. Fortunately for me, it was, and since my other niece Sadie was there when I brought it up, I figured I’d invite her, too.

I have found that in life it is rare for things to turn out exactly as you expect them to. When I imagine the worst, things often turn out better than I expected. And when I think something is going to be great, I often end up feeling disappointed. But this was one of those rare times when everything was as perfect as I imagined it would be. We enjoyed some great meals… 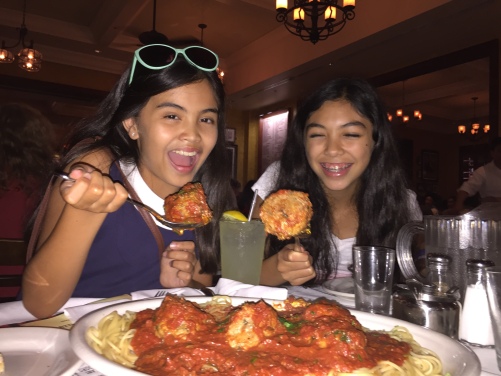 Anxiously awaiting our cheesecake at The Cheesecake Factory

and took in the sights of the city….

But surprisingly, the best moments were the ones between the museums, the monuments, and the meals. They were the times when we were hanging out in the room, and Sadie and Paloma were building a fortress with the couch cushions. (Remember how fun that used to be?) The times when they sang, danced, talked about friends and boys, and discussed how many children they wanted. They were the unspoken ways they expressed their desire to be together all the time–like the fact that they wouldn’t put their luggage in their bedroom, preferring that we all get dressed in the living room instead.

Sadie’s fortress of solitude. And my bed.

As a fitting end to a perfect trip, on the drive home I saw a falling star. And then a few hours later I saw a shooting star. In my entire life, I’ve seen one other falling star and shooting star, so this seemed significant to me. My nieces were asleep at the time but when I told them about it later, they assured me it was lucky.

And truthfully, I was going to need some luck. All of the problems and decisions I had left behind were awaiting me. Frantic phone calls and intense email discussions were about to ensue. I was going to be expected to perform miracles. The magic of the trip was fading, and feelings of helplessness and hopeless were returning.

I was telling a friend about the shooting star and falling star, and he asked if I had made a wish. Which I totally forgot to do. He thought it still counted if I made the wish a week later. I’m not sure what the rules are on wishing upon stars, but I didn’t want to miss this opportunity to capitalize on the possibility of miraculous solutions.

But then the scientist in me wanted to know what the difference was between shooting stars and falling stars, so I looked it up and found out that they weren’t stars at all. They’re meteors! And even though it’s all make-believe anyway, I was disappointed, because I was pretty sure that wishing on meteors didn’t count.

But then I saw my niece Sadie last weekend for my dad’s birthday and broke the bad news about how I saw 2 meteors instead of stars and now my wishes weren’t going to come true. She assured me that my wishes still counted. And then she asked me if I had wished I could meet Federer. Damn! I can’t believe I didn’t think of that myself!

But perhaps the point of seeing the shooting star and falling star at the end of our trip wasn’t about meteors and wishes and luck. Perhaps it was meant to be appreciated as is, in the moment, as something rare and wondrous. Which still made it a perfect end to a perfect trip. Because my nieces are like stars to me–beautiful, brilliant, and awe-inspiring. Whatever the next moment may bring, in this moment, I am thankful for my time with them.

But I still hope my wishes come true.

I didn't know it at the time, but I wanted to be a psychologist so that I could figure out how to be normal. I think many people come to counseling for the same reason. What I've come to learn is that feeling good about myself is not about trying to be normal. It's about trying to be me. But it's a constant struggle for me, just like it is for everyone else. So I thought I would approach this task with openness and honesty and use myself as an example for how to practice self-acceptance.
View all posts by Christy Barongan »
← On Being Good
Head Games,Part 2: Sportsmanship →