RSS Feed
← Learning to Put Myself First
Questions for God →

If That’s the Definition of Insanity, Then We’re All Insane 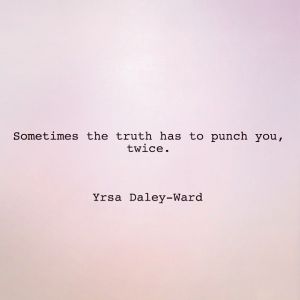 I wish I could say it only took 2 punches for me to come to my senses. I have been knocked down more times than I care to admit and kept on fighting, even when I should have thrown in the towel. But I’m not going to beat myself up about that anymore. Someone has to be in my corner; it might as well be me.

It was Albert Einstein who said insanity is doing the same thing over and over again and expecting different results. With all due respect, he may have been a genius when it comes to mass and energy, but he obviously did not know much about psychology. Because people do this all the time.

For example, I struggled with depression for decades before I went to therapy. I went on and off meds until I had a relapse that terrified me. I’ve been in countless relationships that should have ended before they began. I’ve been working on my forehand for 10+ years but keep hitting it the same way. And I keep buying all this dried fruit in an attempt to eat healthier and end up throwing it all away.

It definitely feels crazy when you’re knowingly making the same mistakes over and over, that’s for sure. But if everyone is doing it, then insanity is normal.

Plus, seemingly irrational behaviors have a certain logic to them. Here are some reasons why we choose to stay in the boxing ring:

1. We’re not supposed to give up. Have you ever seen a motivational poster that says throw in the towel after you’ve been punched in the face twice? Our culture glorifies the fight to the death mentality. If we don’t give up, maybe we’ll be like Rudy and finally get put in the game. Or we’ll be David and slay the giant. Or we’ll come back from 0-6, 0-5 and win the match.

It’s the people who persevere despite all odds who accomplish great things.

2. One trial learning only works for food poisoning. You only have to get sick from a bad crab once to develop an aversion to it. Everything else takes many, many repetitions before we get it right. That’s how tennis pros are able to make a living.

3. Our brains prefer the road well-traveled. The road was paved long ago in our neuronal pathways before we could make our own travel plans, and it is the only path we’ve ever known. That’s why recovery is a process, even when we’re ready for change: it takes time for our neurons to get on board.

4. Change is scary. It’s much safer to have a predictable yet crappy outcome than it is to venture into the unknown. What if I leave this relationship or this job or this city, foregoing comfort and familiarity, only to have things turn out even worse than they were before? How do I know it won’t be a big waste of time and energy?

We don’t know for sure. That’s why change is not for the faint of heart. It requires a tremendous leap of faith in ourselves.

So I’d like to offer a new definition of insanity. Insanity is having the courage to try something different in order to get a different result.

May we all strive to be at least a little bit insane.

I didn't know it at the time, but I wanted to be a psychologist so that I could figure out how to be normal. I think many people come to counseling for the same reason. What I've come to learn is that feeling good about myself is not about trying to be normal. It's about trying to be me. But it's a constant struggle for me, just like it is for everyone else. So I thought I would approach this task with openness and honesty and use myself as an example for how to practice self-acceptance.
View all posts by Christy Barongan »
← Learning to Put Myself First
Questions for God →