Why I Love Sports

So I’m sick again. Which really sucks. I thought there was some unspoken rule that you can only get sick once per season. That if you spent a week of your Christmas break in quarantine with nothing to do but watch bowl games and knit until you develop carpel tunnel syndrome, you paid your dues to the virus gods. Apparently I was mistaken.

Since it’s just me and my inner critic, I spend a lot of time trying to alleviate my guilt about having to cancel all my therapy appointments and being unproductive. It’s not my fault. I have to put myself first. At least I don’t have a terminal illness. Life isn’t about being productive. At least I get to watch tennis and basketball.

In an effort to obsess about something more positive, and as a tribute to March Madness, I thought I’d share my top reasons for why I love sports.

1. Athletes are the best reality TV celebrities. I have much more admiration for Roger Federer for his athleticism, his demeanor on and off the court, his love of the game, and the way he handles his celebrity status than I do for Kim Kardashian. Who somehow is able to obtain sponsorships and ample media coverage despite having no talent that I’m aware of. 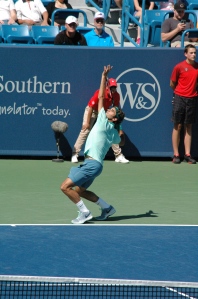 2. Bonding time with my friends and family.  My brothers drive several hours to come to Charlottesville to watch UVA football games, and we’re not even good. Last weekend my friends came with me to the ACC tournament to cheer UVA on. Even though we lost, we had great conversations, ate a lot of junk food, and have a good picture to show for it.

3. Rivalries. Ordinarily I am all about compassion and accepting differences, but sports is the one place where I allow myself to villanize Virginia Tech. It’s almost as much fun to watch them lose as it is to watch UVA win. And when we play each other, I have a chance to witness both of these things at the same time. Tech may have won in football, but UVA beat them twice in basketball. So take that, Hokies!

4. Sometimes I win. When I started playing tennis again 15 years ago, I wanted to find out what I could accomplish if I gave it my all. But I had pretty modest expectations. I didn’t think it was possible to actually win tennis tournaments. I didn’t even know it was possible to compete as a team. And I definitely never imagined that I would be on teams that would advance to districts. For someone who doesn’t consider herself an athlete, that’s pretty darn good!

5. Sometimes you hit the lottery. Last year, when no one was paying attention, UVA won the ACC regular season and tournament championships. And we got the #1 seed in the NCAA tournament. This year, although sports analysts acknowledge that UVA could win it all, no one has chosen them in their bracket. But that’s OK. It may be a long shot, but that’s why we watch sports: there’s nothing like the thrill of victory that’s against all odds.

I didn't know it at the time, but I wanted to be a psychologist so that I could figure out how to be normal. I think many people come to counseling for the same reason. What I've come to learn is that feeling good about myself is not about trying to be normal. It's about trying to be me. But it's a constant struggle for me, just like it is for everyone else. So I thought I would approach this task with openness and honesty and use myself as an example for how to practice self-acceptance.
View all posts by Christy Barongan »
← This is Who I Am
Why Didn’t I Think of That? →