Today we finally got our big snow day.  Enough for sledding, snow ball fights, building snowmen, and everything.  But I am stuck home alone with no one to play with, so I didn’t go outside, except to take a few pictures.  I’ve mainly been knitting a sweater–which I finished–and watching the Olympics.

I really want to be an Olympian.  I don’t care about winning.  I don’t even care if I come in dead last.  I just want to wear the USA uniform.  I want to attend the opening and closing ceremonies.  Stay in the Olympic Village.  Exchange pins with other Olympians.

The main obstacles standing between me and my Olympic dream are that I’m not that athletic or talented.   And I’m too scared to do flips in the air or go high speeds.  Which pretty much eliminates all of the events except curling.  But that seems really boring.

I could imagine myself as an ice skater.  But I didn’t grow up near an ice skating rink.  And apparently you have to wake up at 5 a.m. to get your practice in, which would have been hard for a night owl like me.  Even if I had been motivated enough to do it, I probably would not have been able to talk my parents into taking me to the rink every morning, what with my lack of talent and all.

I’ve tried to think of ways to get around the lack of talent thing.  Maybe I could do one of the events in the Summer Olympics, like badminton.  I don’t play badminton, but how hard can it be to get good at it?  It can’t be harder than playing tennis.

I thought I could also increase my chances of qualifying by competing for the Philippines.  I might even get to carry the flag since they only send about 4 people.  That’s a 25% chance.  I would need dual citizenship, which would probably mean paying taxes in the Philippines or something.  I barely have enough money to pay my bills, so that would be a problem.  Without the talent to attract sponsors, I would at least need money.

Plus, I bet even the badminton players are in good shape.  I couldn’t even talk myself into exercising for 30 minutes today, so I might lack the necessary discipline to be an Olympian.  Even if I were disciplined, my allergies, GERD, and exercise-induced asthma make it hard for me to engage in sustained physical activity.  It’s hard to be competitive when exercise makes you throw up.

Hmmm.  Maybe there really isn’t any way I can be an Olympian.  Maybe I’ll just have to settle for  knitting and watching the Olympics on TV.  I hear the accommodations in the Olympic Village are terrible in Sochi, anyway.

Sophie drew this picture for you. 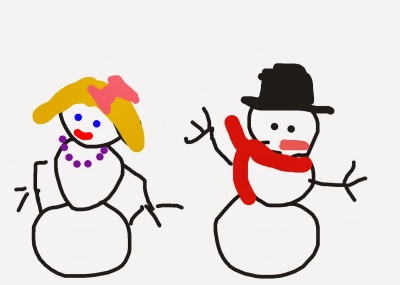 And here’s the sweater I knitted.﻿

I didn't know it at the time, but I wanted to be a psychologist so that I could figure out how to be normal. I think many people come to counseling for the same reason. What I've come to learn is that feeling good about myself is not about trying to be normal. It's about trying to be me. But it's a constant struggle for me, just like it is for everyone else. So I thought I would approach this task with openness and honesty and use myself as an example for how to practice self-acceptance.
View all posts by Christy Barongan »
← Judgment
The Best Valentine’s Day Gift →